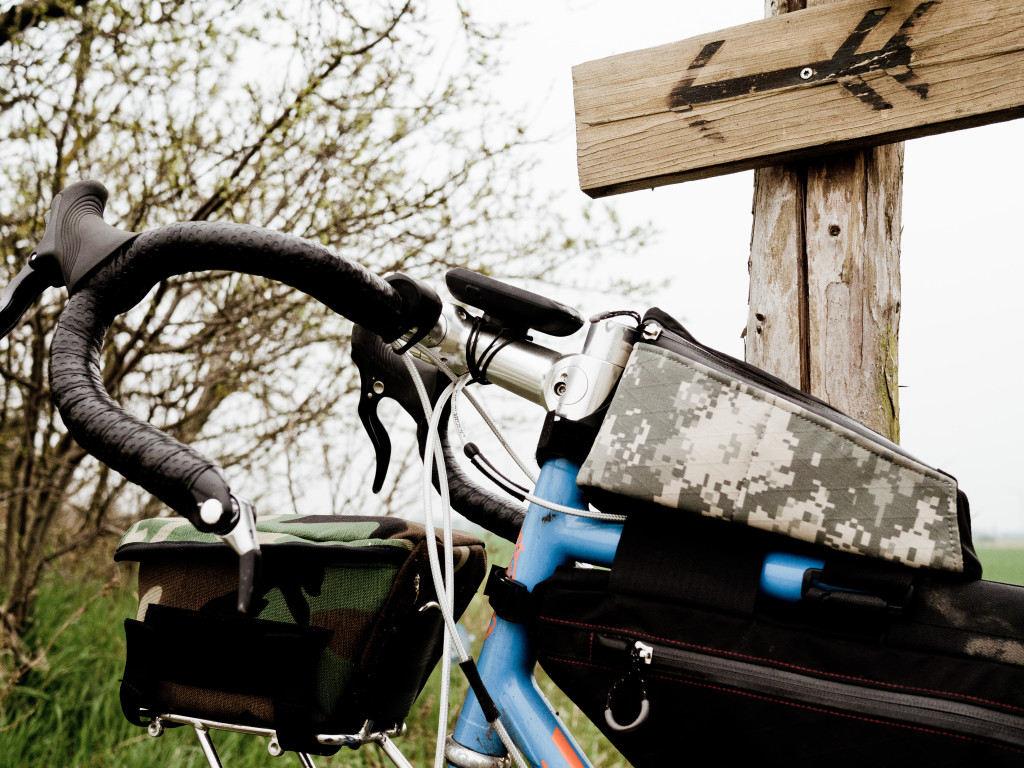 Waking up in a rather nice hotel in the middle of nowhere in Germany and knowing that the day will end in another similar location and not at home really gave credence to the fact that this was a mini-tour.  We met for breakfast, wolfed down magnificent amount of cheese, eggs and coffee, did a quick bike check and headed out.  Today, the direction was south.

For some truly unknown reason, the path first headed north and then backtracked in the correct direction – south.  Before long I was in the forest by myself again.  A small group at the front was riding at UCI-approved speeds and I decided that enjoying the ride was a lot more interesting then making it to the next hotel early.  The same team made it to the hotel at 17:00 the night before and preceded to drink beers until the rest of the riders finally assembled which was around 20:00.  Those 2.5 hours of drinking are certainly appealing for some, but I rather spend the time in the forest, on the gravel and outdoors.

Soon enough I noted that I was riding behind Karsten who was ripping the trails on a very yellow Brodie mountain bike.  I figured that two steel horses are better than one so we teamed up and rode together.  The route alternated again between open fields and forests and was, for me, more exciting than the previous day. 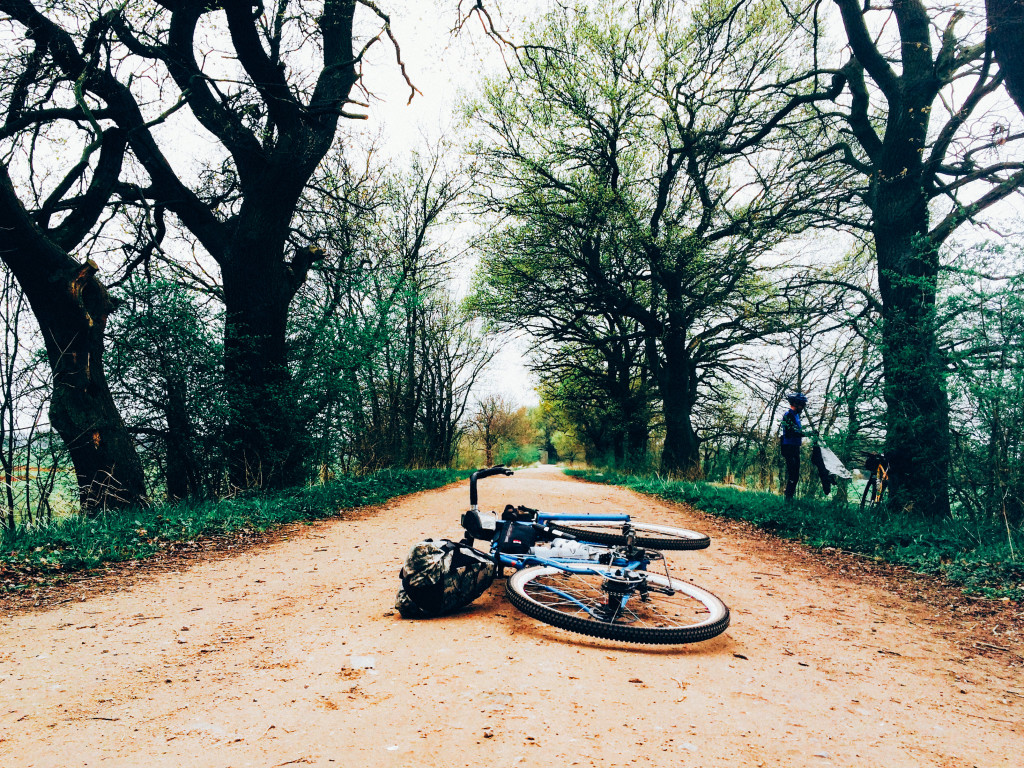 Pretty quickly after we started riding, the tour took us into the next state – Saxon-Anhalt.  Here we followed the river Elbe, one of the major rivers of central Europe, in the direction to its origin.  We somehow missed a turn which meant that when we got to a place in the GPS track that showed us backing up and riding 15km along a dike. We decided to skip this potential exciting part and continue forward.  The GPS track showed that the road would eventually join the original track so we were happy to continue on the same road for a few clicks.

About one kilometer after we made this fine decision we reached the end of the road.  Here, in order to continue, one had to board a ferry and cross the Elbe.  Lucky for us the ferry was waiting just there and as soon as we rode onto it, it took off and crossed the river.  Later we were told that not everyone was so lucky – one of the groups actually had to wait for an hour for the ferry. 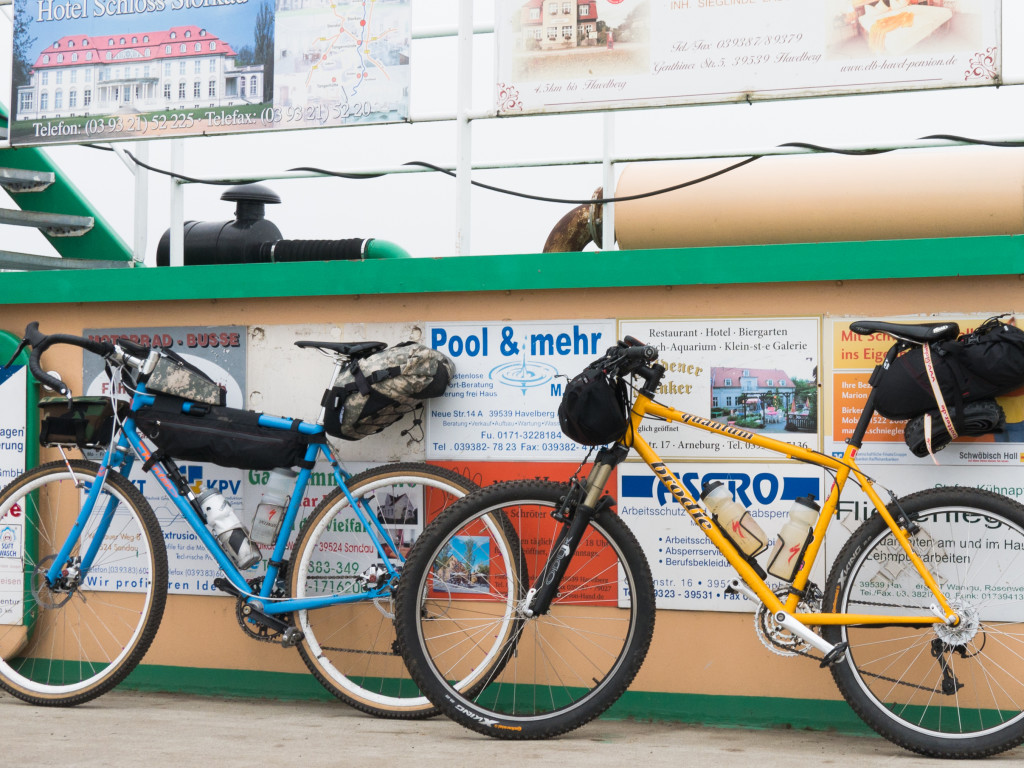 There were really no further excitements for a while.  One of the nice things about following an important river in central Europe is seeing the old castles and fortresses that were setup to guard the trade routes.  The Elbe also has a nice bike path that accompany the river which provides a more comfortable view and a little rest from the gravel.  It also meant that taking pictures from the back of the bike was possible. 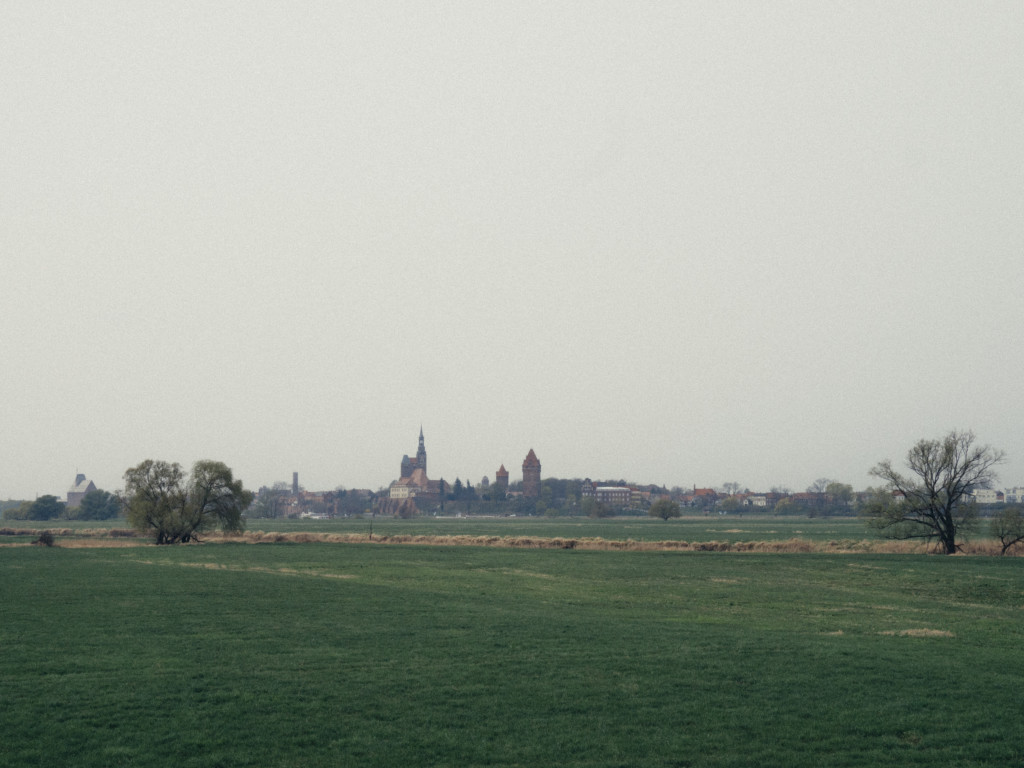 We made it to a village called Jerichow after 5 hours of riding, knowing that we have about 80 kilometer more to ride so we decided to stop for a coffee and a quick bite.  As we were sitting outside enjoying the french press coffee and salad/cakes combination we spotted Sven who was rolling by and flagged him down.  He joined us for a coffee and stayed in our group until the end of the day. 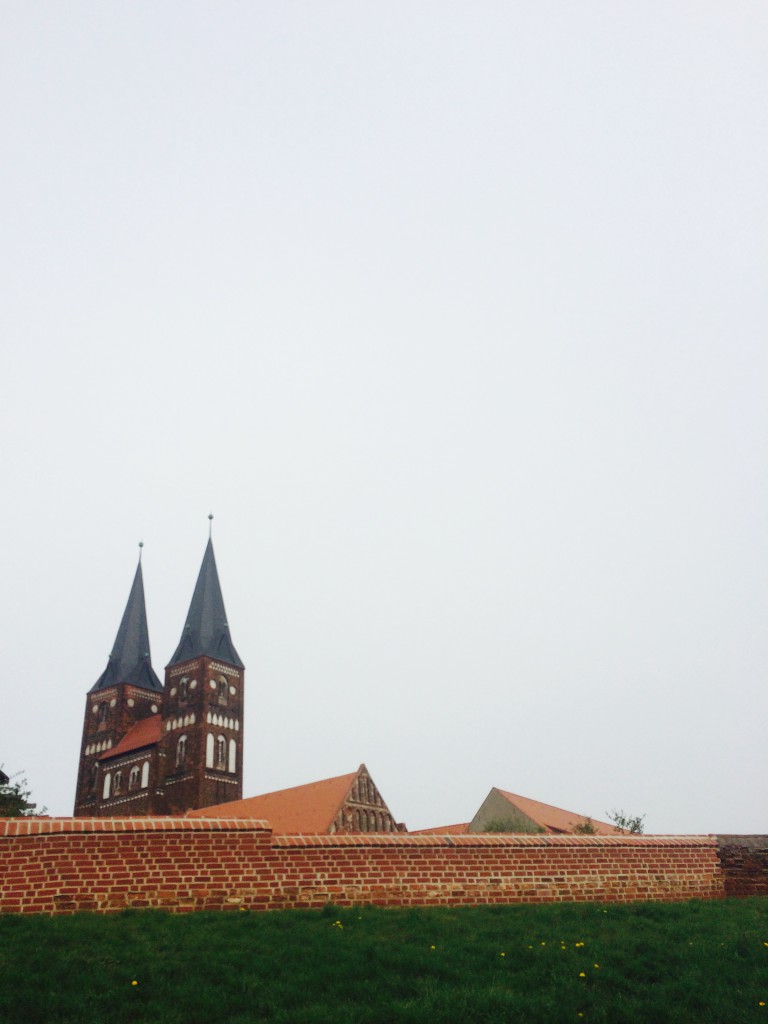 As we were leaving the village restaurant in Jerichow, we ran into another group that was behind us.  Of course we assumed that we were always the last ones in the pack, but this sudden manifestation confirmed that we were not riding tail.  We exchanged a few words but since we were done and then were just starting, we said goodbye and continued.

Not an hour later, while riding in a nice gravel path in a forest, the same group came up behind us and from three we were now seven. 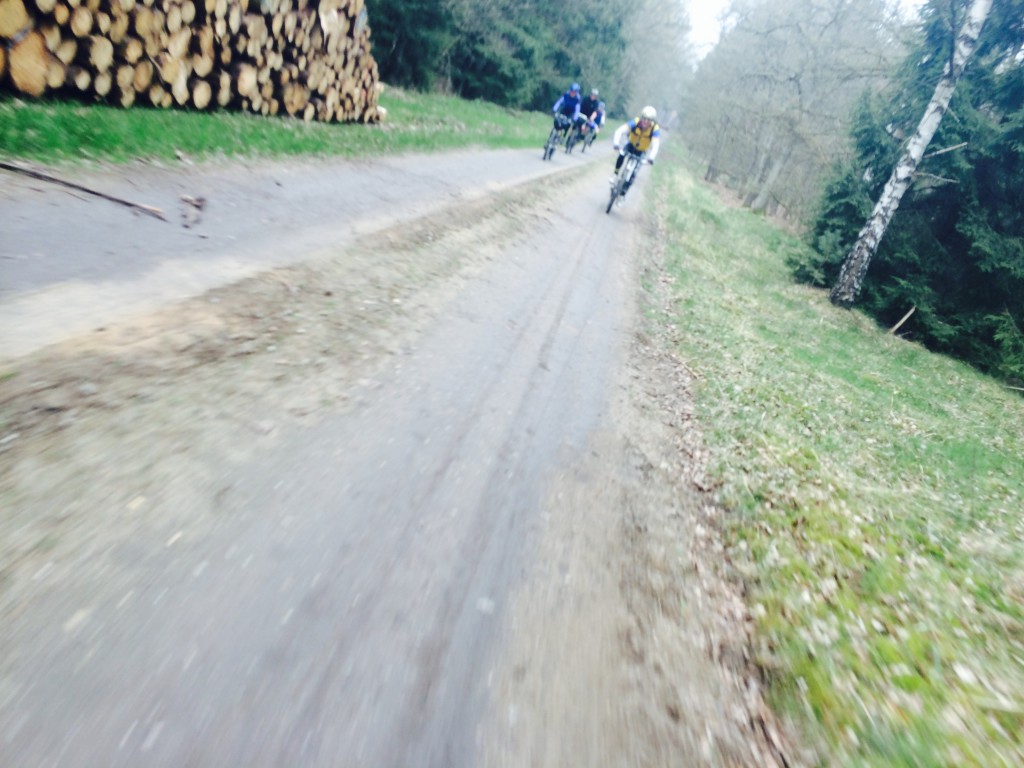 We stayed together for a while until we stopped to explore something and the others continued.  Riding in our little pack of three was great as we took turns conversing, pointing out to interesting scenes and coming up with new curses when the sand arrived.  Sven often had to fix his chain, which liked to jump out every now and then and we always waited patiently a little ahead.

At 17:00 we stopped again and waited for Sven who came up a few minutes behind and showed us his Shimano 105 derailleur.  The cage facing the wheel was gone and he was riding with exposed pulleys!  No wonder that the chain did not stay, but this could potentially be a much bigger problem since the pulleys did not give the impression that they would stay where they were for much longer.  Lucky for Sven, Karsten had some screw-nuts which helped Sven secure his pulleys and hope for the best.  We still had some distance to go and with nighttime getting near, the risk of loosing a derailleur in the middle of nowhere and having to ride at night with no lights, we figured that we should be taking for the road. And so we did.

At this point in the ride certain body parts were hurting pretty badly.  For some of us that meant the seat bones and for yours truly a strange new pain developed in the right knee.  Now, Hunter has been setup as it is for a long while and I have ridden it on many occasions for long distances (like the Camino Norte), so this made no sense. My Achilles Tendon started hurting as well so I was rather happy to be taking the road.  In the last hour of the ride I was pretty much riding with my left leg only which exacerbated the pains in the left Achilles Tendon.  Boy were we happy to make it to the hotel, having ridden 175 km with a moving time of 8 hours and a total ride time of 11.5 hours.  Later on when the next group arrived, riding in the dark through nasty sand, we were very pleased to have made that decision to ride on the road.  Sometimes the practical way is the best way. 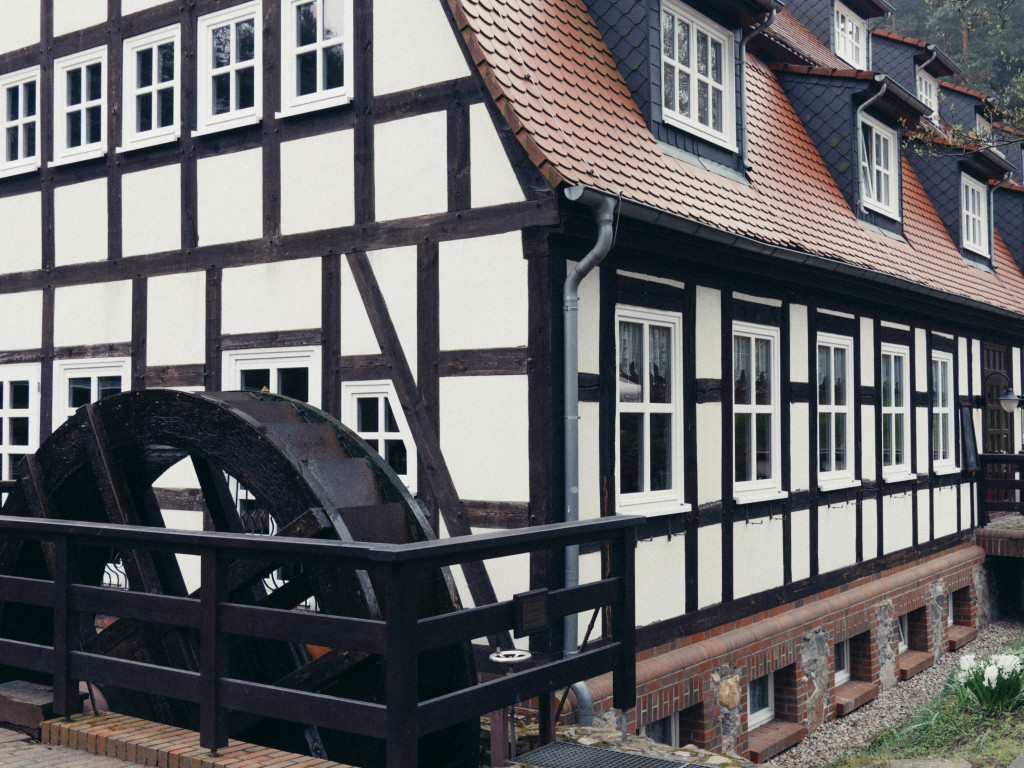 Transbrandenburg Etape 3: Bad Belzig to Potsdam – Ouch said my everythingTransbrandenburg: Etape 1: Berlin to Bad Wilsnack – Houston, we have a problem.