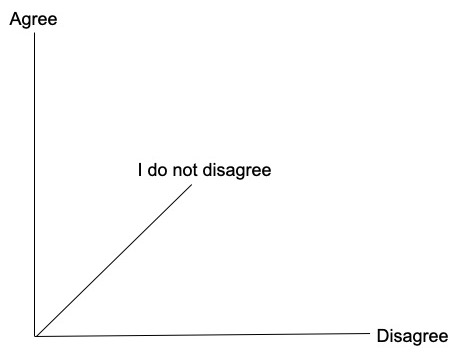 In recent months you notice that more and more colleagues use the phrase “I don’t disagree”. Now, at first that seems like a perfectly reasonable statement to be made, but your brain hurts when you think about it for more than two seconds.

Double negatives are always fun to interpret since they leave so much room which is probably not goal oriented in an engineering discussion. It is ok to disagree. It’s nice to have agreement. But if you don’t disagree, then what do you do? Is this statement just an empty air-filler, similar to “you know” and “like” that is actually not meant to agree or disagree, but is meant to say “I acknowledge that you said something”?

Let us go back to simpler times where we could agree or disagree with our colleagues and friends.  We can even discuss why we disagree – maybe we will even convince our conversation partners to change their mind and agree with our opposing opinion. The English language does not need a third option. 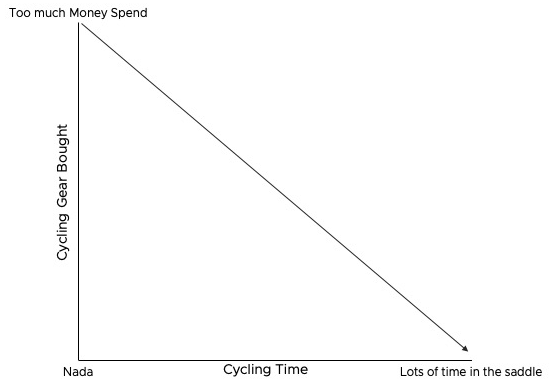 2019 was a year of much travel. Roughly 3 months that year were spent in hotels, and both airline and hotel loyalty cards were maxed out. When you live in a hotel or on a plane, your cycling time is reduced, but another effect could be seen: cycling-related purchases increase significantly.

You spend a lot of time before SARS-CoV-19 hit trying to understand why you were collecting bike related components and making changes to perfectly great bikes while riding a lot less. As soon as the global pandemic hit, countries restricted travel, and you stopped flying non-stop, your cycling-related purchases came to an almost grinding halt. Of course, here and there you still need the odd replacement tube or a USB light, but your cycling-related spending quickly approached zero and time in the saddle increased significantly.

Why is it the case that when you cycle less, you spend more money on bikes and when you actually ride your bike, your spending goes down?

The obvious answer is The Internet. Jokes aside, buying cycling gear has become a very easy itch to scratch. It can be done from anywhere with a few clicks of the mouse. When are travel, when you spend a lot of time in an office or hotel, trying to stay connected with the cycling world means that you inevitably find things that look interesting. ECommerce now makes it almost too easy, frictionless if you will, to satisfy that hunger to be connected to the the bike. So you click. The box arrives often before you do and is waiting for you. But how long do you take to install or use your purchases?

This is when you realize that frictionless is not always the best strategy for a healthy bank account. Adding some friction actually makes you think about your spending and will eventually get you more time on the bike than in the workshop. In fact, the goal for cycling should be to spend more time riding the bike than working on the bike (which inevitably follows once you buy some bike components).

Positivity In The Time of Corona

For the majority of humans on plane earth, the last months have been challenging. Massive changes to our every day lives were forced on everyone in order to deal with a global pandemic. People are getting sick every day and the number of deaths at the time this is written is over 500,000. In order to keep one’s sanity, it is great to try and find the silver lining in the situation.

3. You can ride your bike every weekend. Pre-SARS-CoV-19 you spent almost a weekend per month, if not more, traveling to or from somewhere. Often, these trips were back or from California which meant that you were in a pretty bad shape (see point 2 above) on the weekends. Since the lockdown started you are able to ride your bike every weekend. It’s truly amazing especially since the lockdown in Germany meant that one could still be sporty in public.

4. The air quality is great. Well…all that reduction in flying around the world is certainly looking to have a positive effect on our weather. The air is fantastic and nature seems to be having a really good year. If we can get some rain more often that will really be amazing (but not on the weekends please…see (3) for why).

Things will change, a vaccine will be found, and humanity will quickly forget what it was like to live under a global pandemic. However, not all memories will be negative. The list above will be a positive reminder.

Alex Kantrowitz book, Always Day One, is an excellent study into the top 5 Tech companies in the world: Amazon, Facebook, Google, Apple and Microsoft. Alex interviewed many employees and ex-employees in these companies and have done extensive research to summarize what makes these companies tick. It’s a page turner.

There are a few themes that seem to repeat in all but one company – Apple. In fact, Apple comes across as a relic in an age of innovation. Apple’s culture of secrecy, its reliant on external consultancies to build tools and provide support, and it’s deeply rooted top-down approach, sounds a lot more like IBM or GM 25 years ago than a tech company evaluated at $1.5T. So one of the first take home messages in the book: Apple is truly disfunctional.

The other 4 companies all share an interesting trait between its leaders: the engineer’s mindset. It seems that with Microsoft’s Satya Nadella and Google’s Sundar Pichai, along side the founders led companies Amazon and Facebook, the role of the leader is to facilitate ideas creation and support the engineers that actually invent. This is not a new concept. In fact, Andy Grove created Intel’s dress-down culture, a culture that was unique at the time, in order to give the engineers at Intel a voice. So the concept is not new, but all 4 leaders, according to Kantrowitz, embrace the engineer’s mindset with both arms. The engineer’s mindset can be summarized by:

Another strong notion in the book is the drive to automate everything that is not invention. In essence, the tech giants focus a lot more on ideas and invention and a lot less on execution. Each company does things slightly differently, but apart from Apple, they all try to flip the pyramid on its head and spend time inventing and a lot less time executing. This cuts clear across warehouse workers at the Amazon fulfillment centers that are retrained to be robot mechanics to creating HR AI that scans through resumes and help recruiters identify candidates. There are of course massive implications to the ever increasing reliance on AI and automation (what do we do with an untrained workforce? Is the education system setup to teach inventors as opposed to people who execute?) but these topics are going to be addressed in another post.

Will the tech giants stay that way forever? Probably not. At their high-time, GM and IBM surely expected to be the leaders forever, but as the tide shifts and technology moves, old giants tumble and new giants are born. What is fascinating in this book is the emphasis on culture and how culture helps keep the tech giants where they are. Each of the leaders depicted in this book focused and has been very intentional on building the organization’s culture. This ties nicely to Ben Horowitz’ “What You Do is Who You Are” which also emphasizes the importance of culture in organizations large and small. In that respect the chapter on Microsoft and its current CEO, Satya Nadella, is the most interesting study on corporate culture. Nadella had to take a very broken corporate culture and turn it around completely. Given that 10 years ago, a younger me would have puked all over such statements as “the new Microsoft Office Suite works great on my Mac”, and given Microsoft’s current market evaluation, I’d say that Nadella has been very successful.

How Dependent Are You On Other People?

In a new article from Berlin’s excellent ESMT, Konstantin Korotov states that “What the crisis has revealed is how very dependent our work is on other people.” Initially, you want to agree with the statement, but the more you think about it, the less it makes sense.

You have been working remotely for almost 5 years now. Your experience as a remote worker taught you that you have to be extra open and welcoming and…well…nice to your colleagues and forge relationships through common projects, goals and opportunities. Physical proximity is a nice way to accelerate such bonds, but these can be done remotely just as well if you are cognizant enough to the challenges of being remote.

So now that everyone is remote, and new employees are not being physically introduced to their new colleagues by their manager, we have to collectively be more cognizant and spend the extra time to virtually meet our peers and colleagues. In fact, unlike dating, the smell of your colleagues or the way they look should play a small role on how much you like them so everyone being forced to work remotely might actually bring more teams together. The office could be saved for those team building exercises that will happen again once we can all travel again.

We will have a vaccine and we will be able to meet our colleagues again. Let’s not wait until that happens to build teams and relationships.