Transbrandenburg: Etape 1: Berlin to Bad Wilsnack – Houston, we have a problem. 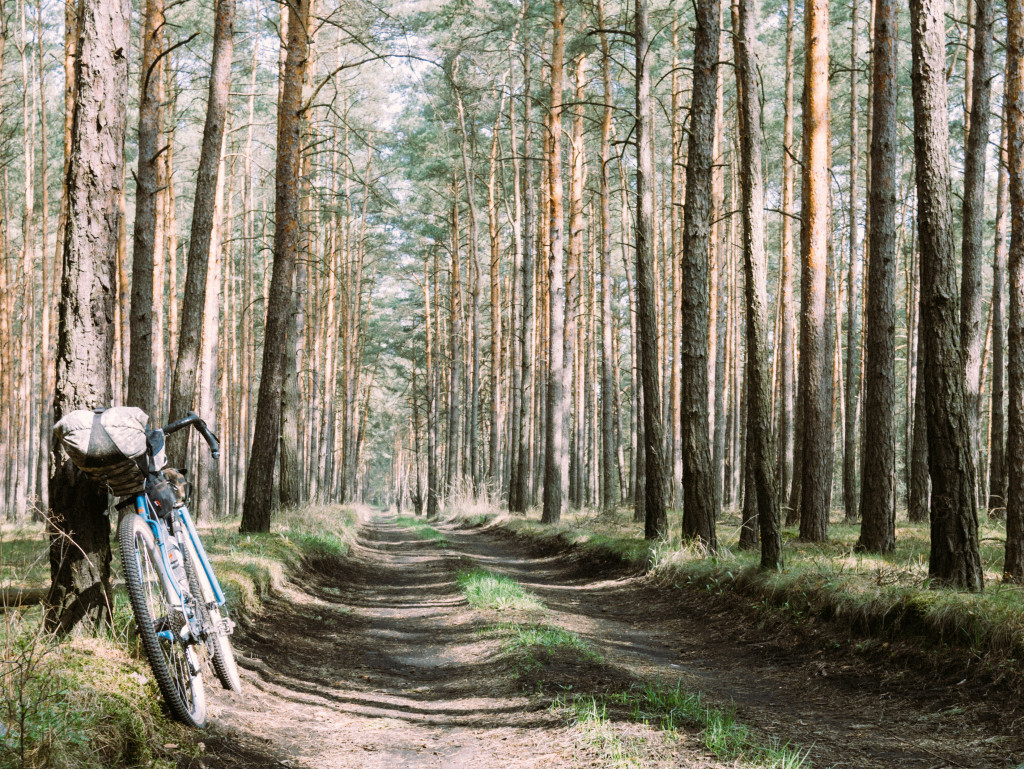 I really tried to plan my riding for the first 6 months of the year.  So when Ralf posted the idea for a three days ride in the state surrounding Berlin – Brandenburg, I marked my calendar, secured a day off, and was excited for weeks before Transbrandenburg arrived. The big Friday arrived, 6 days after the first Brevet of the season.  I did a brief test ride in the middle of the week to verify that the Hunter setup was acceptable and concluded that we were set.  Was the rider set?  As it turns out, the answer should be “not really,” but at the start of the ride, the rider was feeling very confident. We collected the group in a coffee shop close to the central train station between 8 and 9.  Other than Ralf, who I met in person during the Brevet, I did not know a single soul.  Introductions were made, Ralf repeated his mantra that this is not in any way a race, and we took off. It certainly felt like a race as the ragtag group of cyclocross, mountain bike and Hunter took off to the road.  The first 20km were familiar to yours truly so keeping up with the group was relatively easy, but I detected a certain urgency to get somewhere with the rest of the group – the where and why were not completely clear. 22 km from the starting point I managed to log the first technical issue – in a heroic feat I managed to snap my derailleur cable.  At this point we were already riding in smaller groups and the dudes behind me were kind enough to stop and help.  We rigged the derailleur in such a way that I could continue riding, but the sound of the chain scraping the cage and the thought of three days riding this way made me think twice about proving that I can actually have fun riding this way.  As luck would have it, we were still somewhere near Berlin so I googled for bike shop, found one, and headed over there.  The group continued. The mechanic at the shop understood the urgency especially when I named the destination for the day.  He took 20 minutes to replace my cables, tune the derailleur and soon enough I was on my way.  At this point it was 12:00 which meant that I had ridden 22km in 3 hours – not an impressive distance even for a toddler on a pushbike. “The show must go on” I thought to myself as I followed the Garmin map for miles and miles by myself, stuck in a rather negative headspace asking myself why am I even doing this ride.  The direction was North-West and was mostly kept to loose gravel roads crossing fields.  It was all rather obvious and expected, apart from those instances where I thought “but how would one even know where this thing goes?”.  I followed the path and was making great progress. And then I got to a coordinate which showed an alternative.  I vaguely remembered that Ralf mentioned that the main road will cross a field that will only be rideable when dry.  Well, it was dry so I decided to stick to the main track.  The track continued into a field of dirt that was treated by a tractor and had deep grooves.  I tried to ride inside one of the grooves, but every time I swayed a little off center my pedals hit the edge of the groove causing me to loose control.  This was the first walking path.  Some followed. At the end of the field the GPS track indicated that the correct way was to my left.  The only small issue with that notion was the distinct lack of any traces of a path.  After working with computers for the best part of my life I decided to trust the little Garmin and continued on the edge of the field. The path curved around what appeared to be a dike.  I climbed with the bike to the top of the dike, but no traces of any rideable path were seen from there.  So I went back down and continued towards a fence that had something resembling a path next to it.  The path was a little wet but rideable so I continued.  And then the slightly wet earth turned into very wet earth and then some puddles followed and the puddles changed and turned into a swamp. I found myself rather alone, bike axle-deep in water, looking ahead at much deeper water and a huge question mark hanging over my head.  One of the nice things about being in the middle of nowhere is the fact that you can scream without bothering anyone.  Just getting your frustrations out feels good.  So I cursed the whole world and the nice fellow who organized the tour and then decided to backtrack and look for some sanity.  200 meters back, with shoes that made squish-squish sounds, I found a slight trace of a path, took, it and was back on a slightly more dry route. Another unknown distance past and I found myself rolling into a tiny village only to run into Sven and Frank.  It turns out that the two had some flat tires and other misfortunes and so were rather behind.  We collected our bruised souls, banded together and continued riding, not stopping for anything apart from one snap I got to take, until about 16:00. 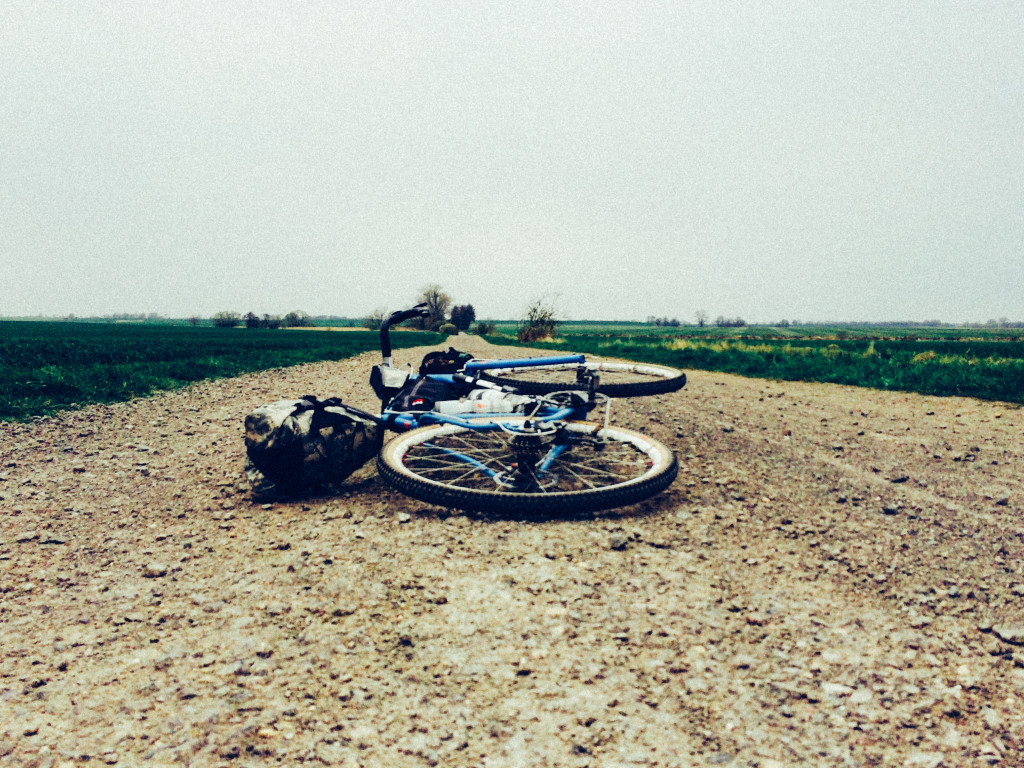 We still had ways to go so we stopped briefly in a supermarket for coke, bananas and a warm soup and continued on our way.  I remember that the combination of very gray sky, rather cold and wet temperature and a very monotonous scenery were a subject of discussion in which I proclaimed that as a trans-Iowa training course, this is a perfect setup.  Just as this conversation peaked we started riding along side a huge lake (Klempowsee) which was exciting, bordered on single trail and had us focusing on not running into trees more than on chatting.

The last part of the ride was exciting as we were trying to beat the darkness.  We were pounding the gravel as hard as we could after a long day in he saddle, noting that this was very atypical ride for Ralf to organize since we run into no loose sand sections.  We were happy and the thought of the accommodations waiting for us just 3 km ahead helped push harder.

And then, true to form, we hit the notorious Brandenburg sand – this wet, black, loose sea-sand, caused by the massive deforestation that the area experienced in the last century.  My rock’n’road tires turned into sand cakes while Sven’s 30mm UCI-legal cyclocross tires just stopped in their tracks. 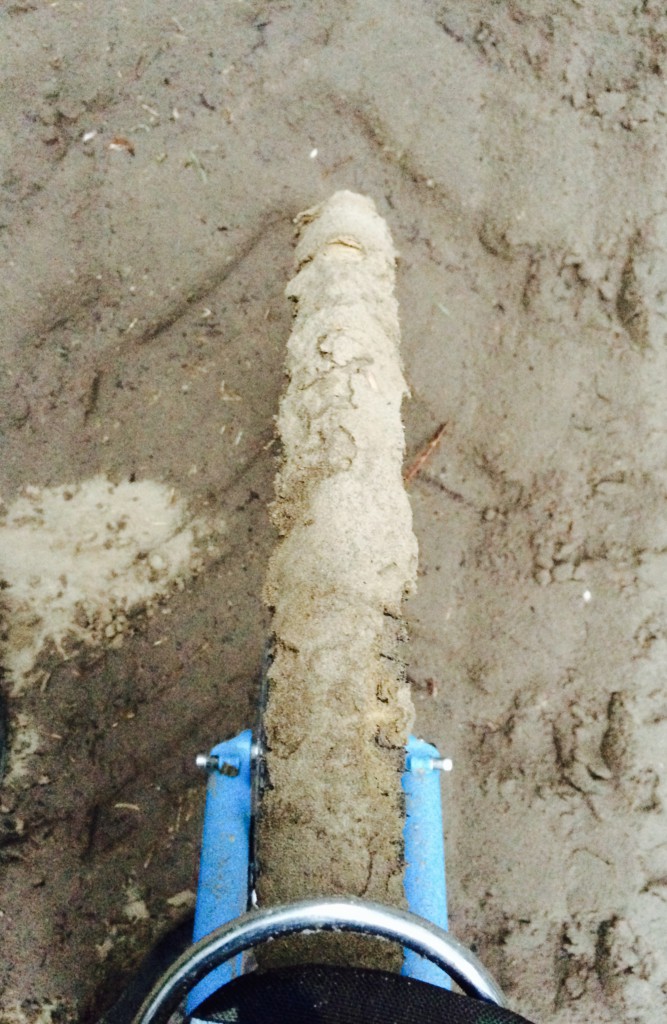 Even Frank who was riding pretty thick mountain bike tires gave up after a while and we proceeded to push the bikes further until the area cleared, we jumped back on an in 4 minutes we hit the hotel where most of the group, apart from the fellow riding single speed mountain bike, were waiting.  We had ridden north of 160km, almost exclusively off-road.  We were ready for shower, food and a good night sleep.