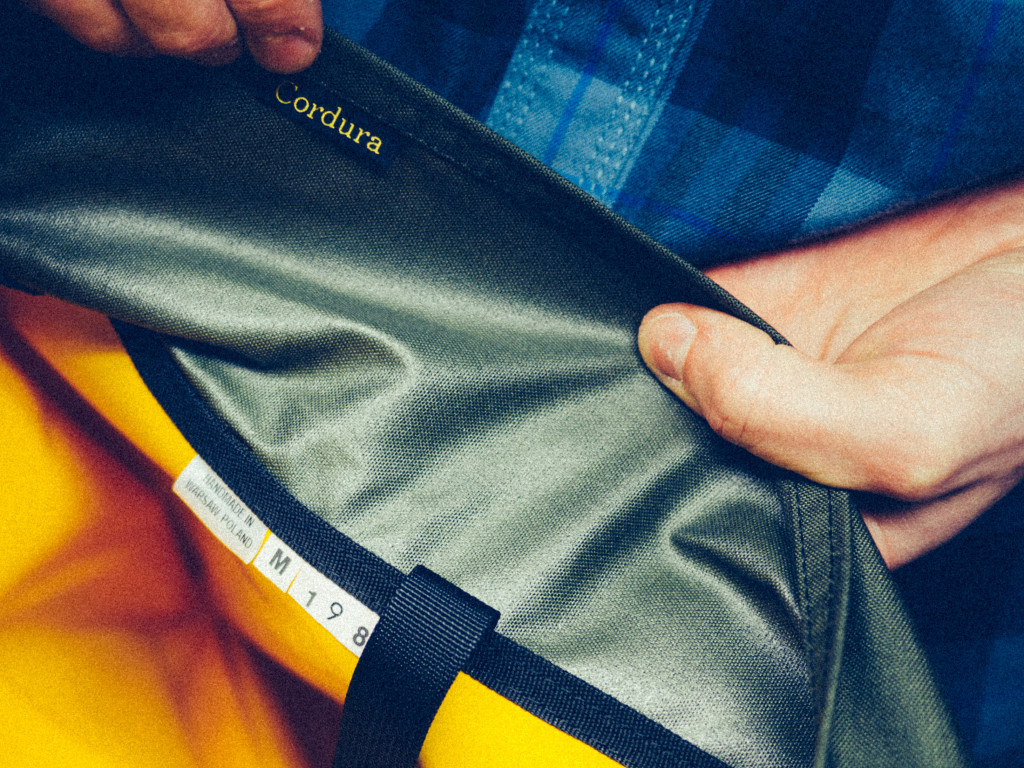 It’s not the first time that I mention that I have a small, or perhaps not so small, fetish for bags.  I also like to support European manufacturers.  Blahol has been on my radar for a few years now, ever since I bookmarked their saddle toolbox.  So on a recent visit to Warsaw, Poland, I got in touch and asked if I can come visit. 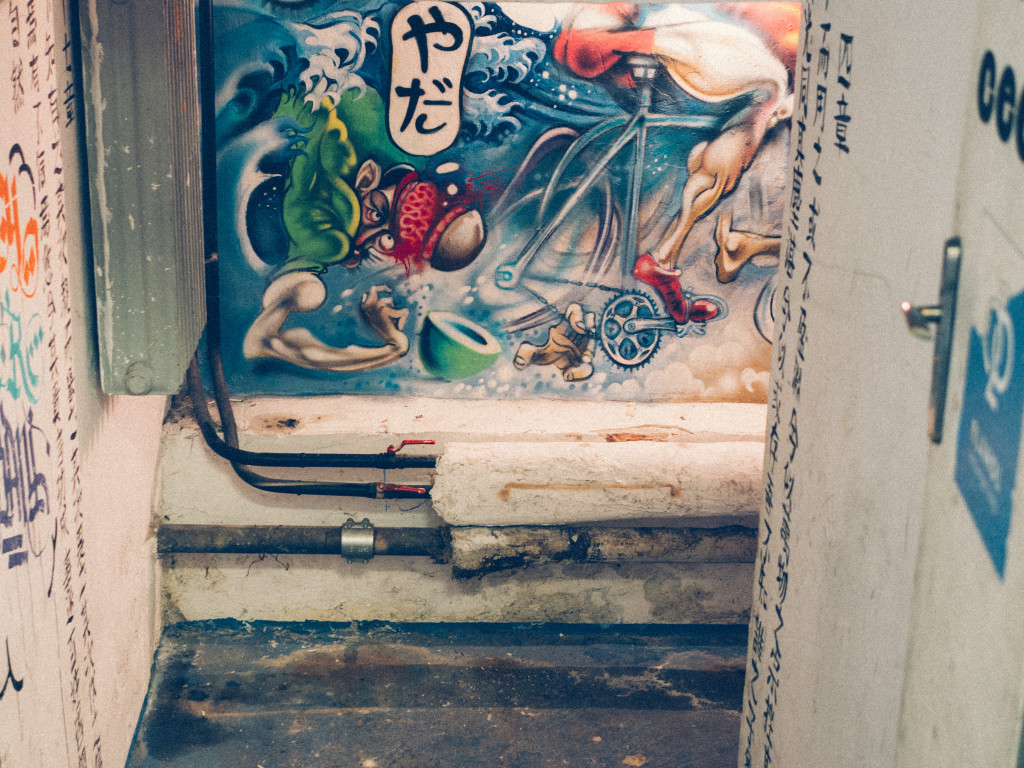 As I was walking down the industrial building staircase towards the basement I could not help but notice traces of the past, evident also in many similar buildings in East Berlin – the exposed pipes, the concrete, the ceiling that’s barely 2 meters high and the utilitarian nature of the whole environment.  This was clearly a space with deep history and stories of its own, and our little cycling world was taking over.

The staircase wall was painted with a beautiful mural showing a track racer in grotesque position, muscles pumped and determination that only eastern block athletes used to posses.  There was no way to become a professional cyclist during the days in which Europe was split into two, so every cyclist, no matter how good, was an amateur cyclist.  This painted guy did not look amateur at all. 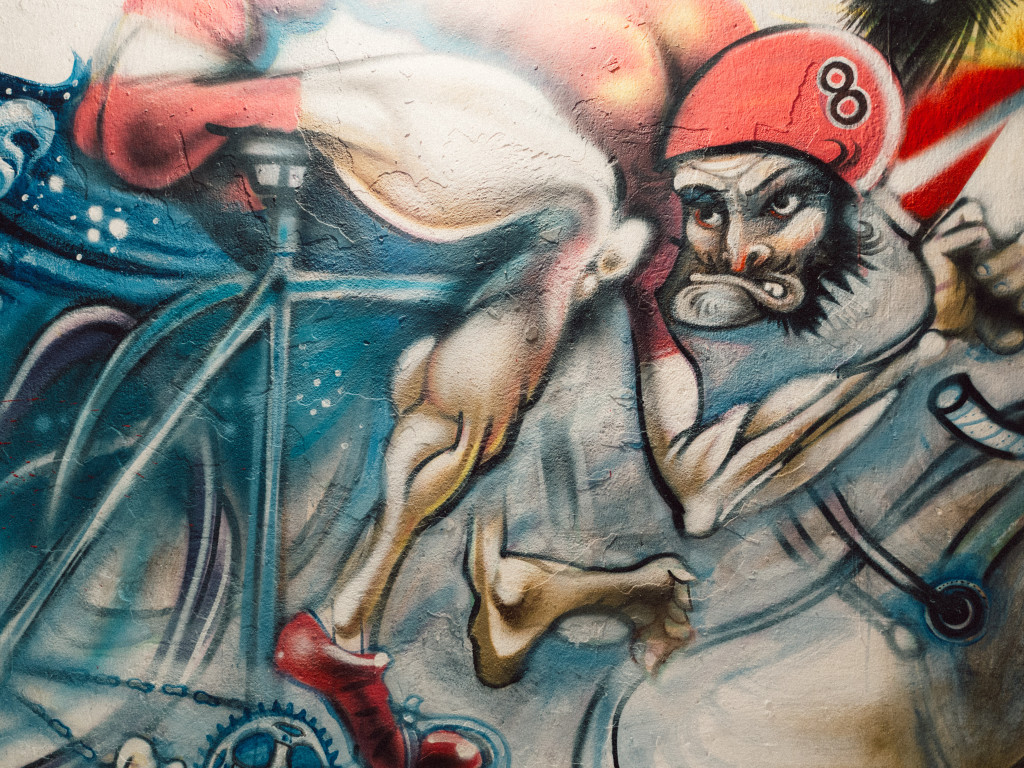 The staircase opened to a corridor filled with bikes.  I had to watch my head since the ceiling was roughly the height of my head and at times was cross by pipes.  Some of the bikes had alley cat cards in their spokes, one even proudly presenting Blahol’s logo.  None of the bikes were fancy and all were steel.  The first door marked with the industrial looking sign proclaiming Cech opened into a room filled with bikes, each in various stages of repair – this was a bike workshop, a velo-surgery room, a safe-house operating table for Warsaw’s elite two wheeled transporters. 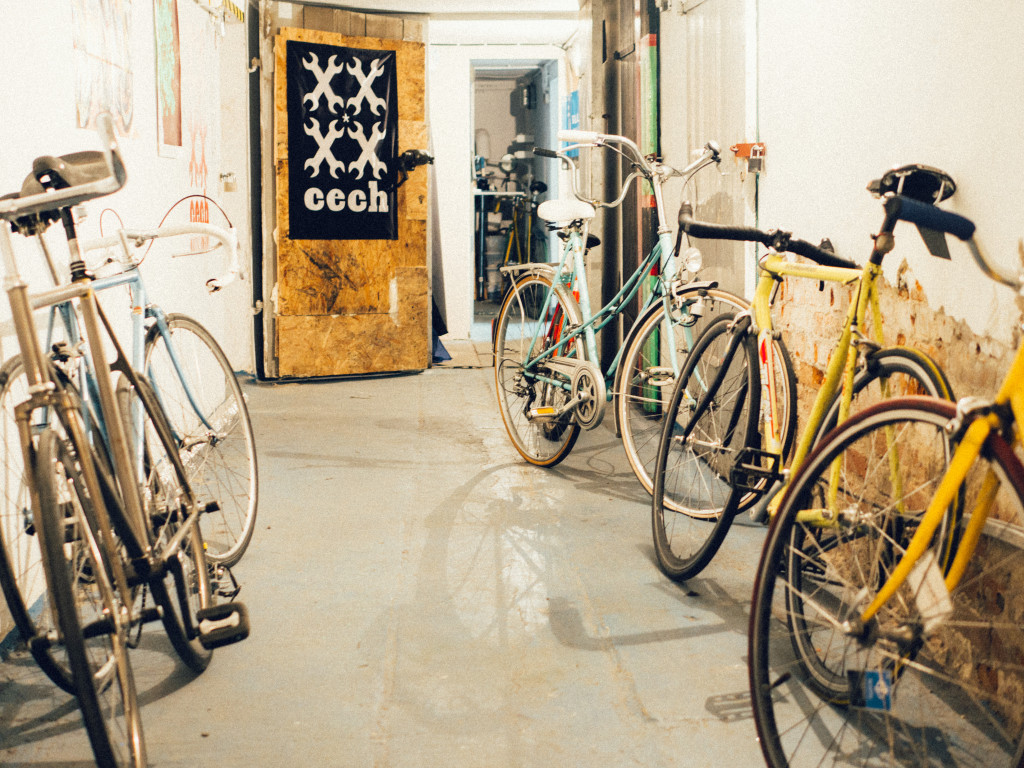 My goal was the door at the end of the corridor.  I was heading towards a room, no larger than 4×4 meters, that hosts, for another two weeks until the boys move to a new space, the Blahol workshop, order processing unit, web operations and storage space – the whole operations is hosted here. 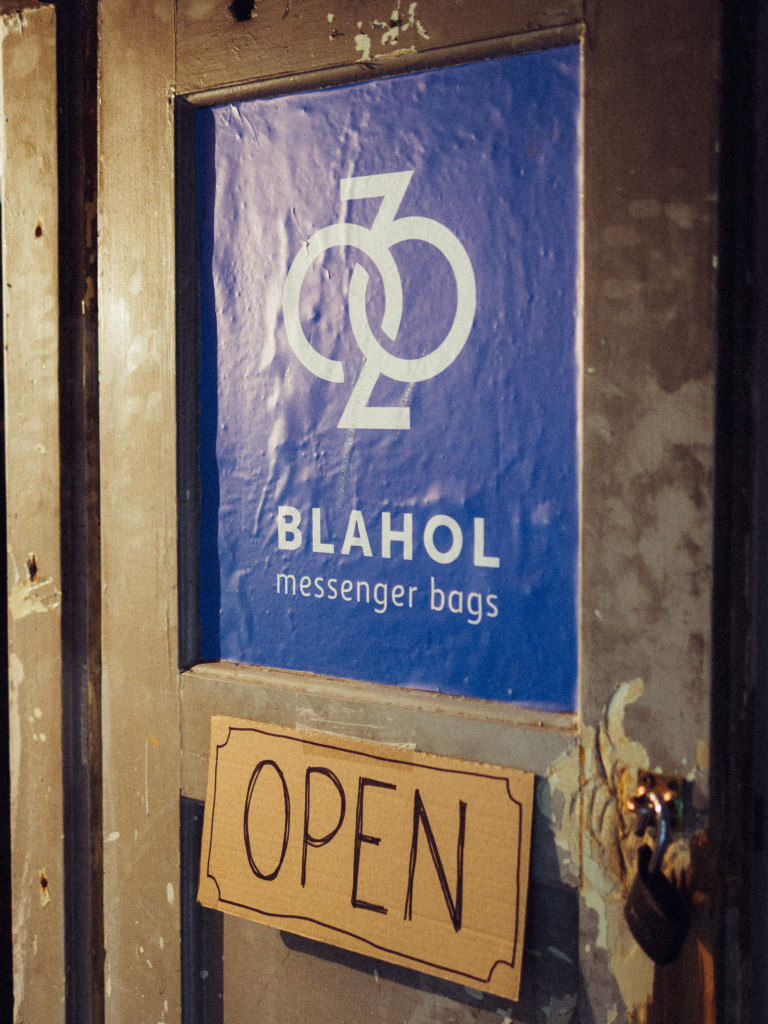 Blahol started 7 years ago by making messenger bags.  In its initial 5 years the operation was an after work activity that developed slowly and allowed the young artisan to develop his skills, supply chains and product offering.  Two years ago, Blahol gave his day job the middle finger and started working full time for himself. 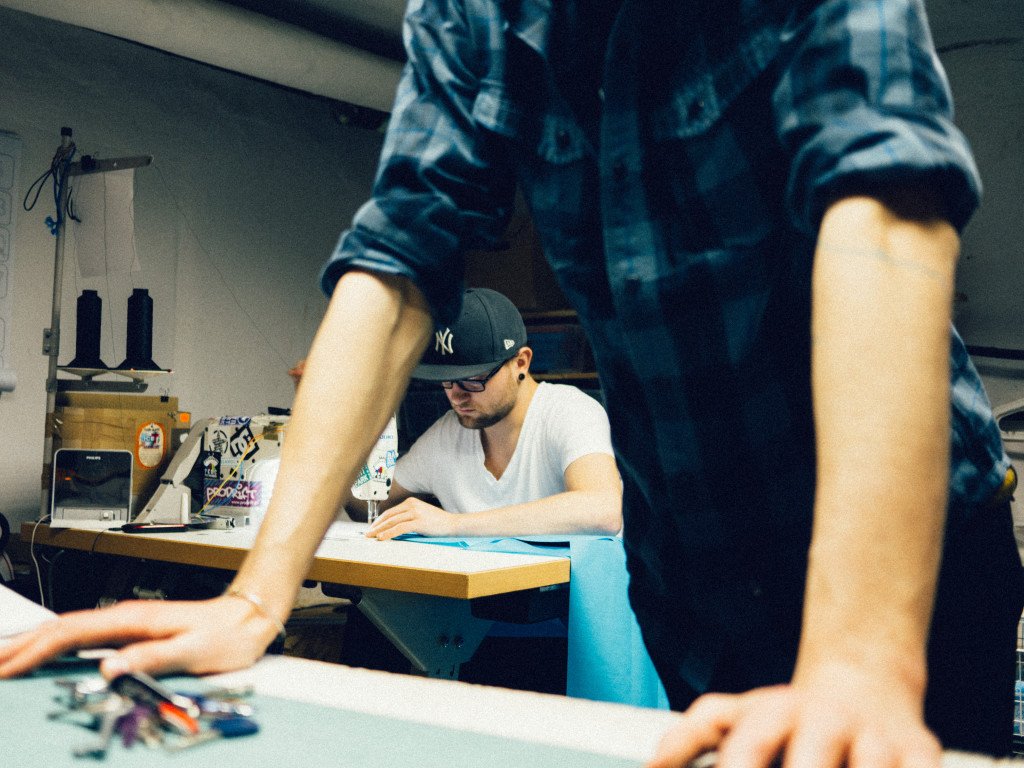 Together with his brother, they operate the two sewing machines and take care of the customers.  At times, Blahol tells me, his girlfriend helps as well.  The name of the company is actually the nickname of the man himself.  He explained that when a friend of his helped with the logo, said friend suggested that the name of the company will be the nick name.  7 years later the logo and name are a perfect match for this young and independent operation. 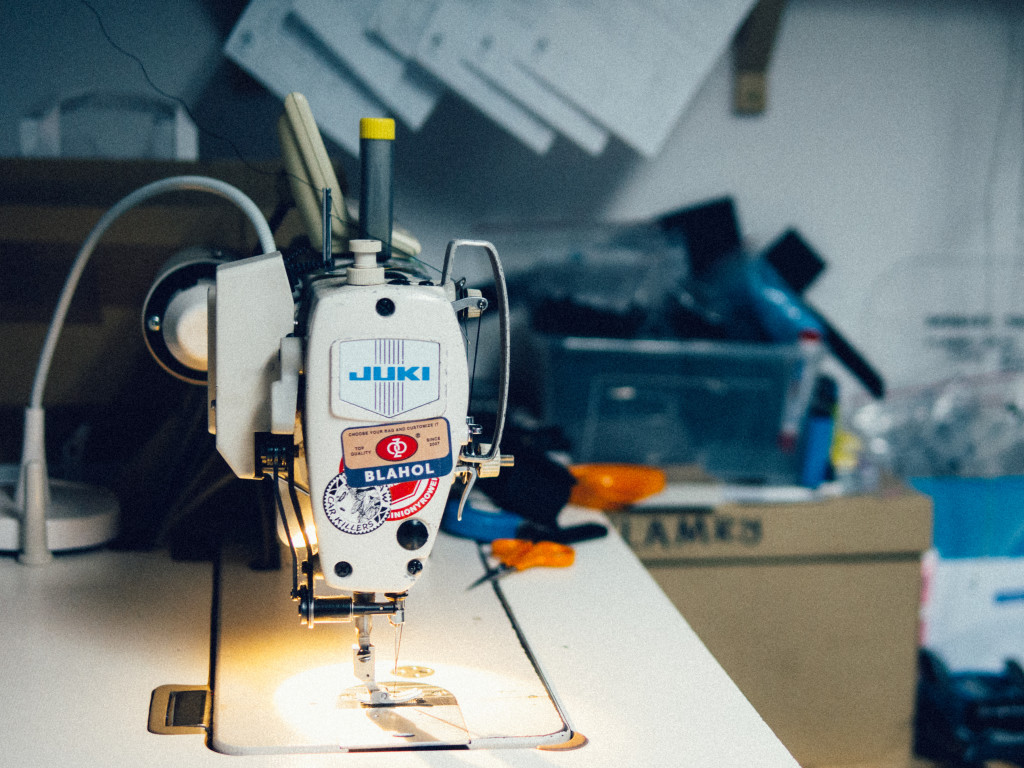 I did mention that I’ve got a little bag fetish, but in all the years I’ve been chasing bags around the planet, from the first messenger bag I bought in London in 1993 (hello Rasta colors Timbuk2) through the rather large collection of Chrome bags I own, I never got to see the bags being made, from scratch.  Blahol sews all the bags exactly where I found him using two Juki Japanese industrial sewing machines.  For material Blahol uses only the best elements, some, like the straps, from Poland, while the main fabric, Cordura, he sources from Italy. 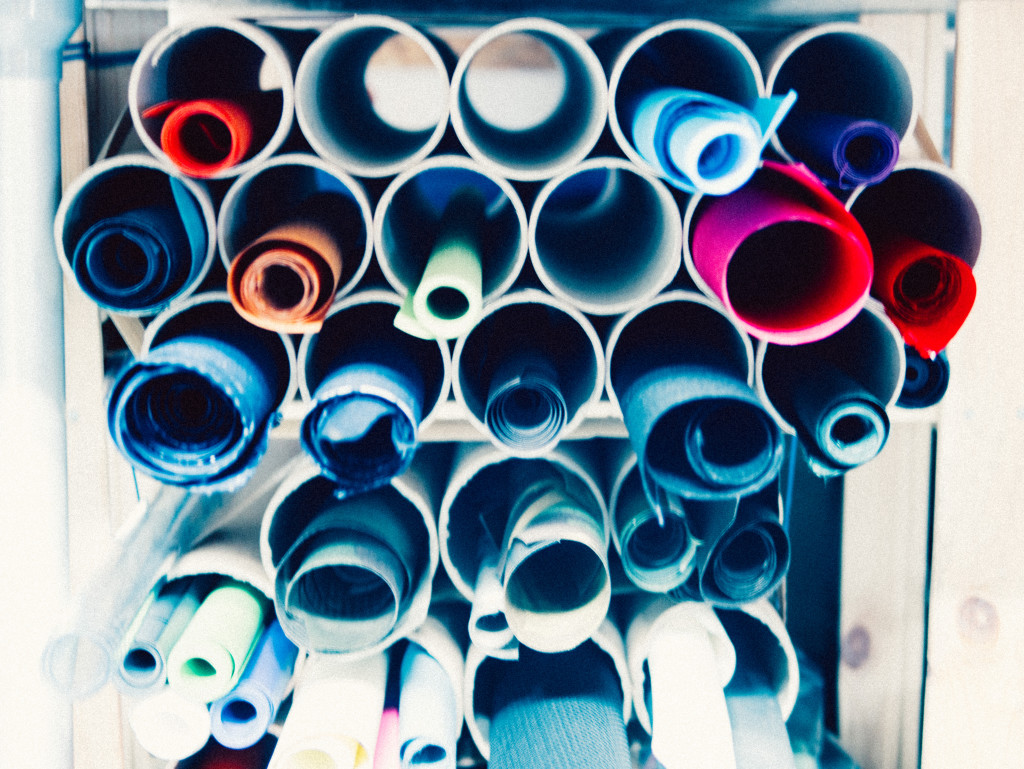 For a small company one of the biggest challenges is getting the material.  A large fabric manufacturer like Cordura, is interested in selling fabrics in 1,000 meters pieces and not in small batches.  So Blahol sources his materials from other manufacturers that buy in bulk and sell him smaller pieces.  This means that at times the colors he has, like the Swedish military cameo bag he had lying around,  can be wild and unique and also run out quickly.  Through the website the customers can create the color combination they want and Blahol and his brother make each bag when the order is made.  Each bag also gets a unique ID enforcing the concept behind “this is your bag, no other bag like it exist.” 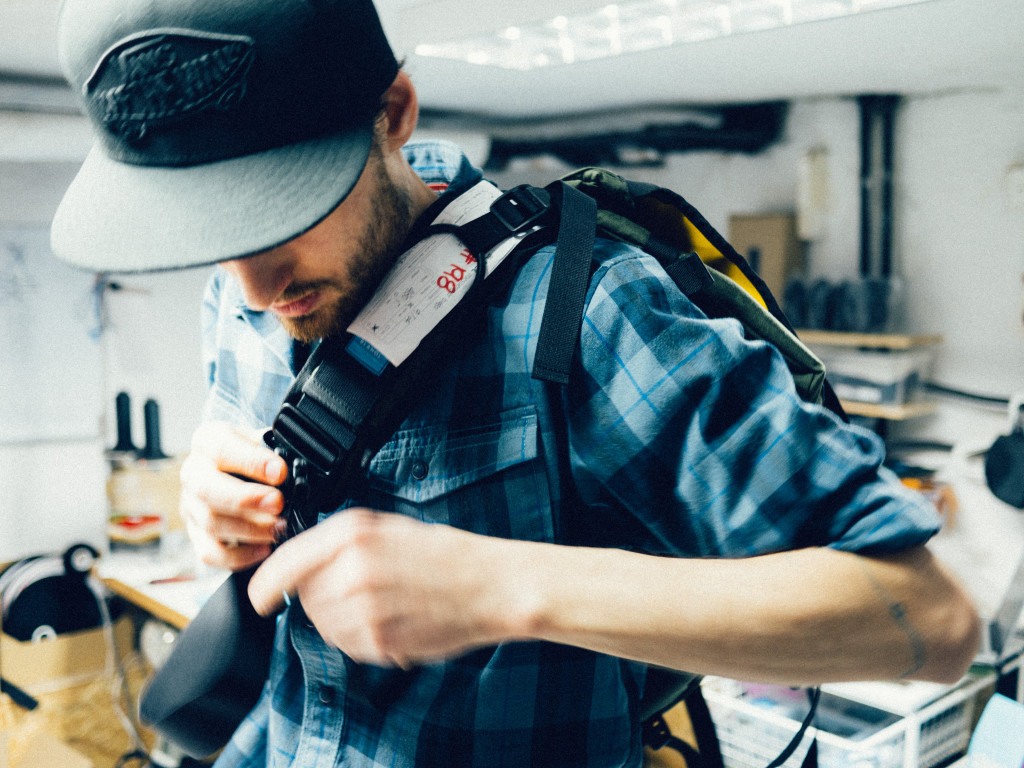 The messenger bag that Blahol demonstrated to me had some pretty cool features and looked to be indestructible.  It had a double strap for those instances when you really have a lot of stuff to cary.  The strap looked cushy and the buckles industrial strength and massive.  I could totally see these bags being used and abused by bike messengers in Warsaw, but when I asked Blahol about the local messenger scene, he proclaimed that there are not a lot of these dudes in his city and that the bags mostly go to individuals that like to use these shoulder-strap style bags.

There were really a few other pre-made bags in the studio.  One was a waist-bag. 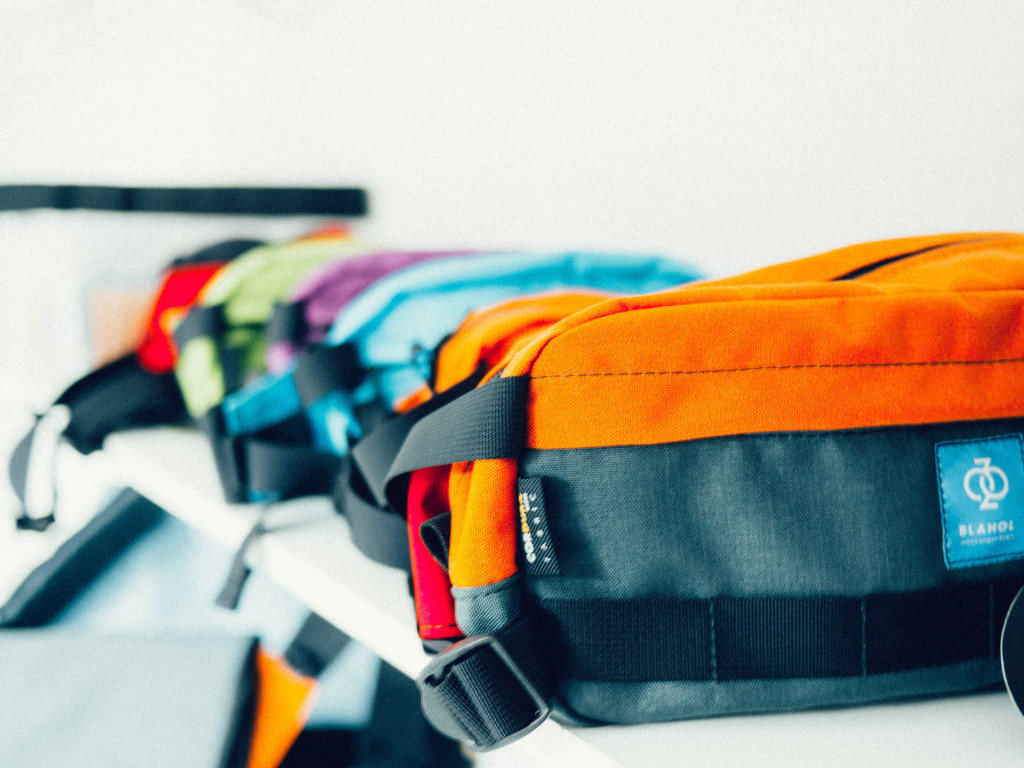 And the other was a hip bag. 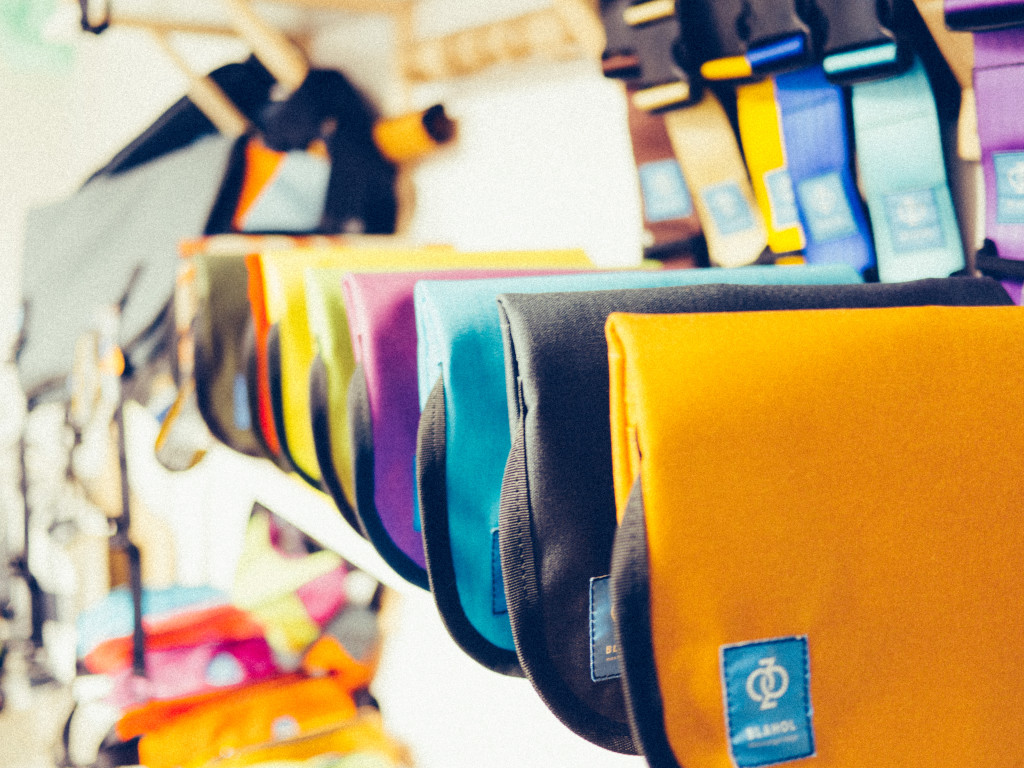 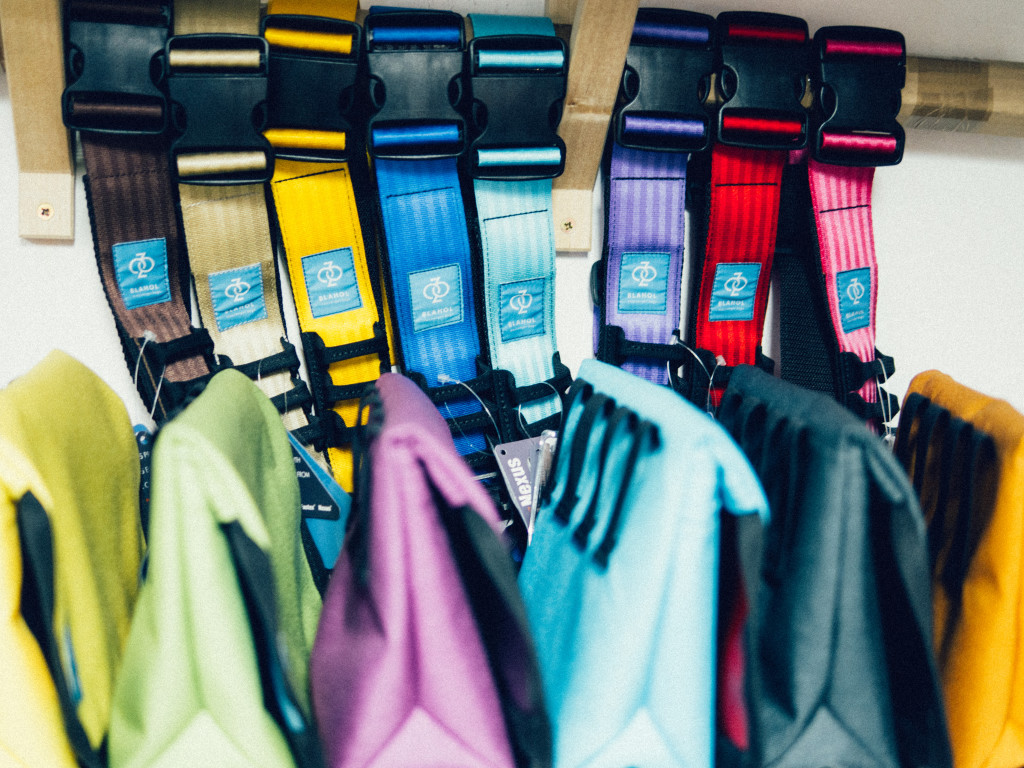 Another bag, that lucky for me was in the studio and has not yet left the shop to the customer, was the new wave backpack.  This is a brilliant backpack with roomy and fully waterproof main compartment that’s actually configureable by removing straps from their default positions to a different position, closer to the top of the bag, to allow for longer things to be packed.  It also has a deep pocket on the front where you can keep your pens, cables, chargers and what nots.  Another secret feature is the quick access, left and right pocket that’s located in the middle of the bag.  It seems like Blahol thought about everything – you can even velcro-off the back-pad and wash it or use it as a seating matt.  Brilliant.  The Swedish cameo bag he had is one hell of a zombie-apocalypse gear which I found difficult not to snatch out of his hands immediately. I knew that Blahol could out run me in a second so that never happens. 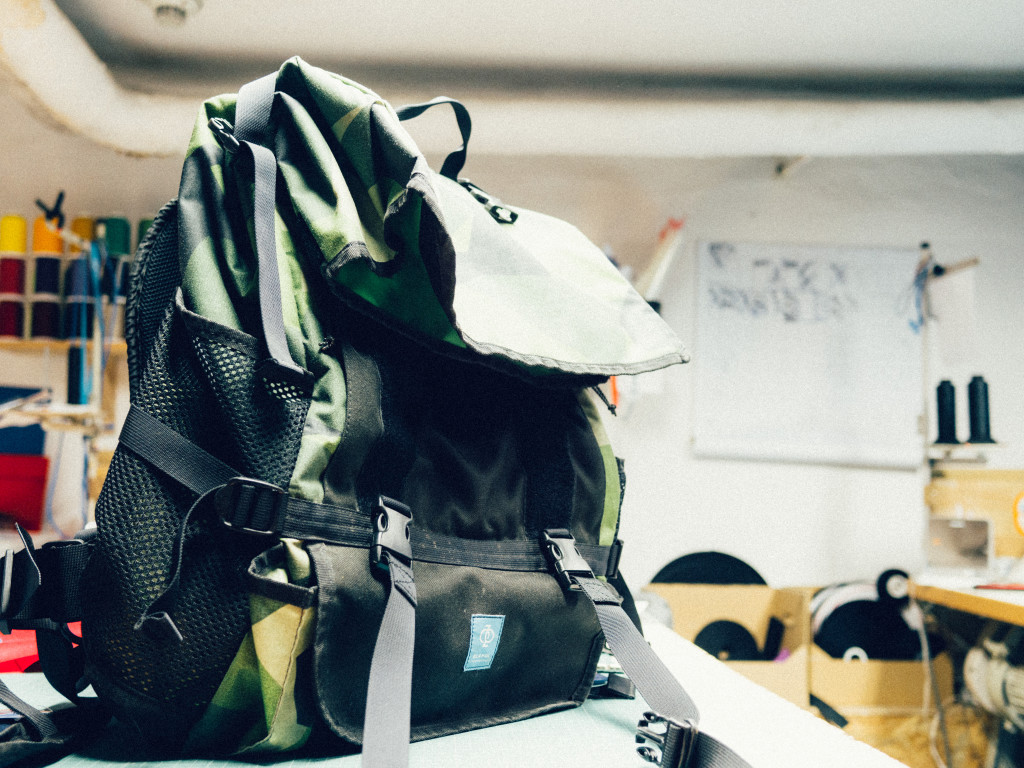 For such a small business I was surprised to see an order management system that ensured the customer is able to track exactly when his or her bag is being made, finished and shipped.  The brothers schedule their production by days and work diligently to get each bag out the door as soon as possible.  These days, when every customer is the Western World, is used to near-instant delivery from the likes of Amazon, even small businesses have to compete with standards that were near impossible to meet only a few years back.  Blahol seems to have his order management and customer order tracking system well under control. 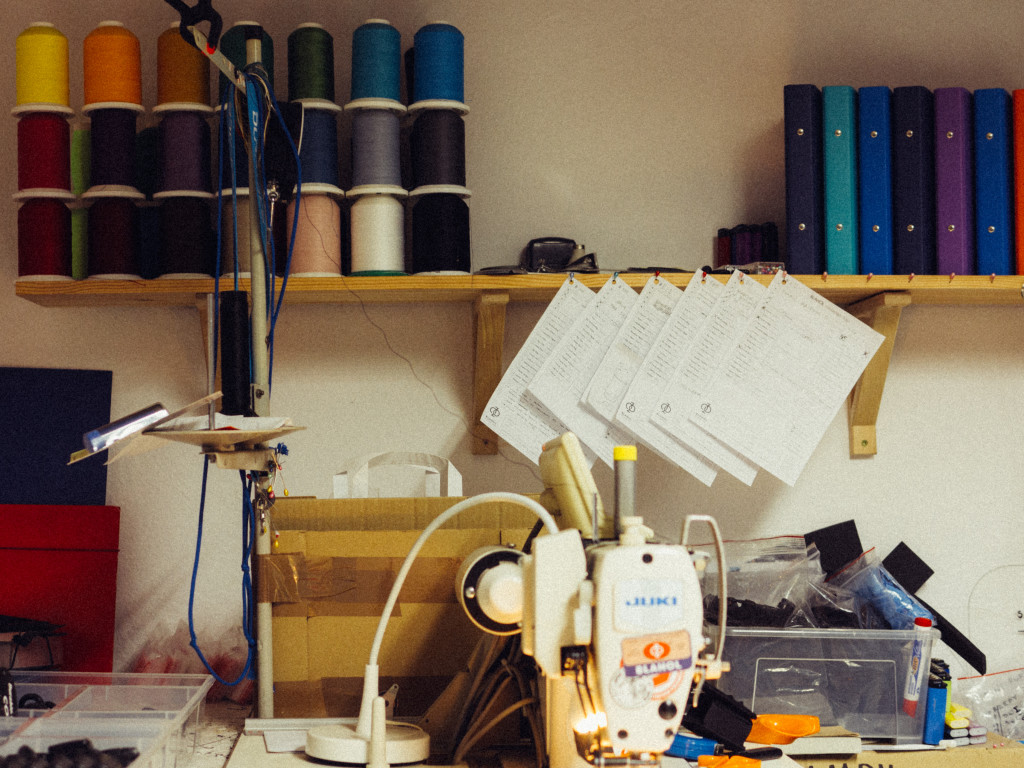 I am stoked on this find.  The bags are rock solid, made with attention to details and utilitarian mind set.  The boys behind the bags use them and know, from first hand experience, what is important to the user.  Even though the company is small, the bags are affordable – something that can not be said for many other bag companies, even those who manufacture in the far-east.  I know the Blahol brothers will do well and can whole heartedly recommend giving their bags a chance. 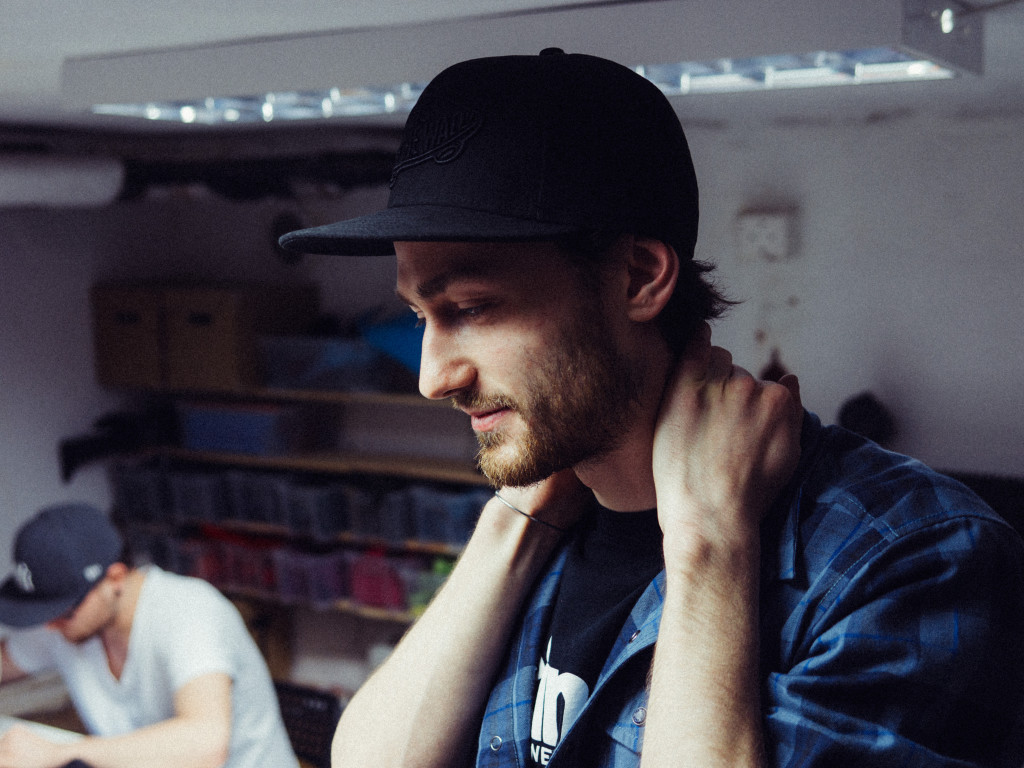 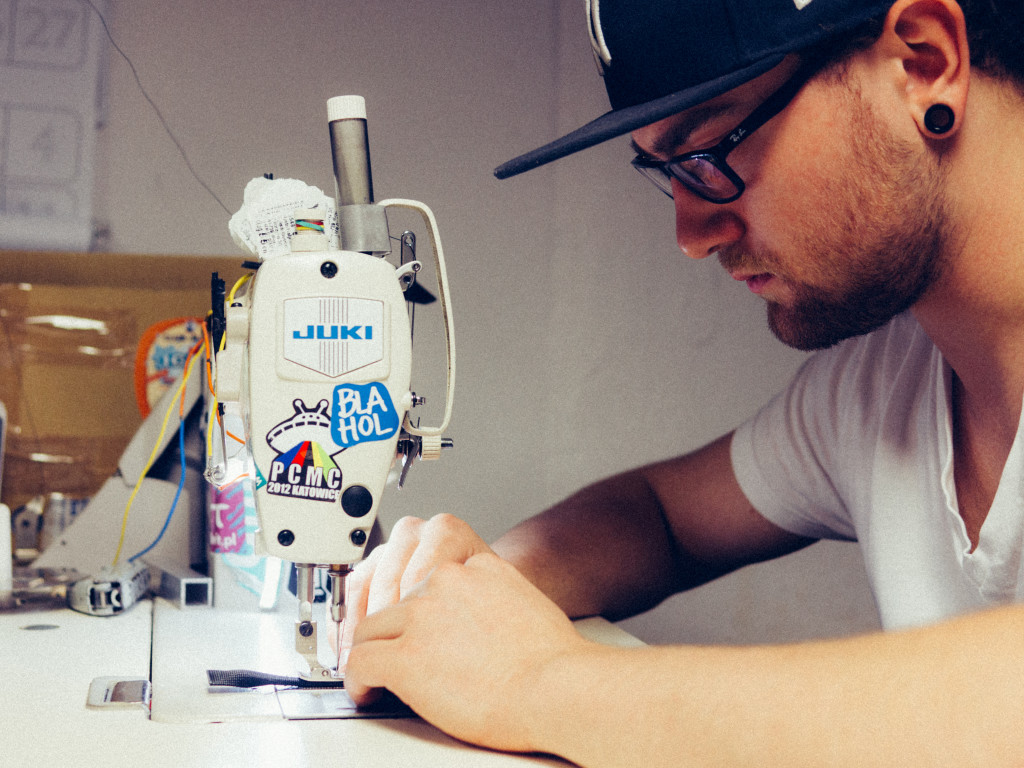 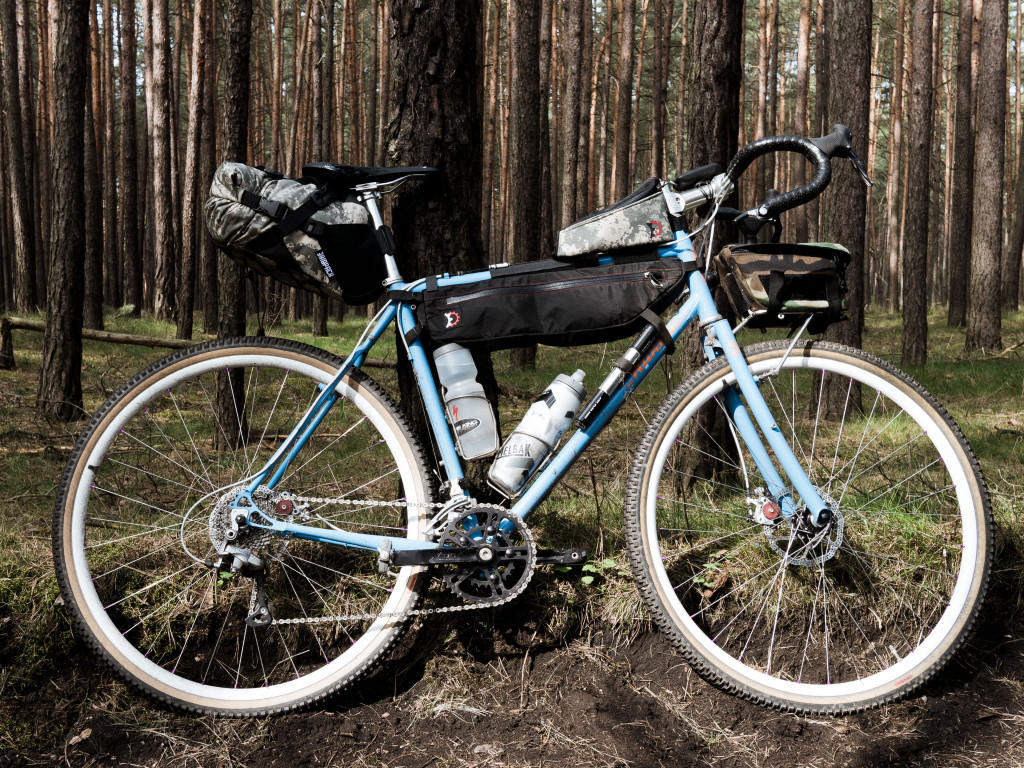 Anyone that knows me also knows that I have a slight problem with bikes and bags.  While the bike addiction might be under control these days, meaning that I’m stoked on my current steeds and just want to ride them and not build new ones,  the bag addiction is far from gone.  My off-road touring monster, Hunter, is very capable of taking front and back panniers.  But when riding off road or completely not on any roads, I find that panniers tend to get in the way.  So I was looking for alternatives and came up with the setup displayed above.

From the backend of the bike to the front you have the following:

It’s really not cheap or easy to get some of these bags in Europe.  Shipping Revelate from their home in Alaska to Germany will take a lot of time, will include high cost of postage and possibly will involve the friendly customs people.  BikePack makes frame bags – both custom and standard which could work well (I have no personal experience there) – this could be considered a good alternative.  Other than this, feel free to let me know what other European alternatives you know of.

Have fun out there.

On the road again 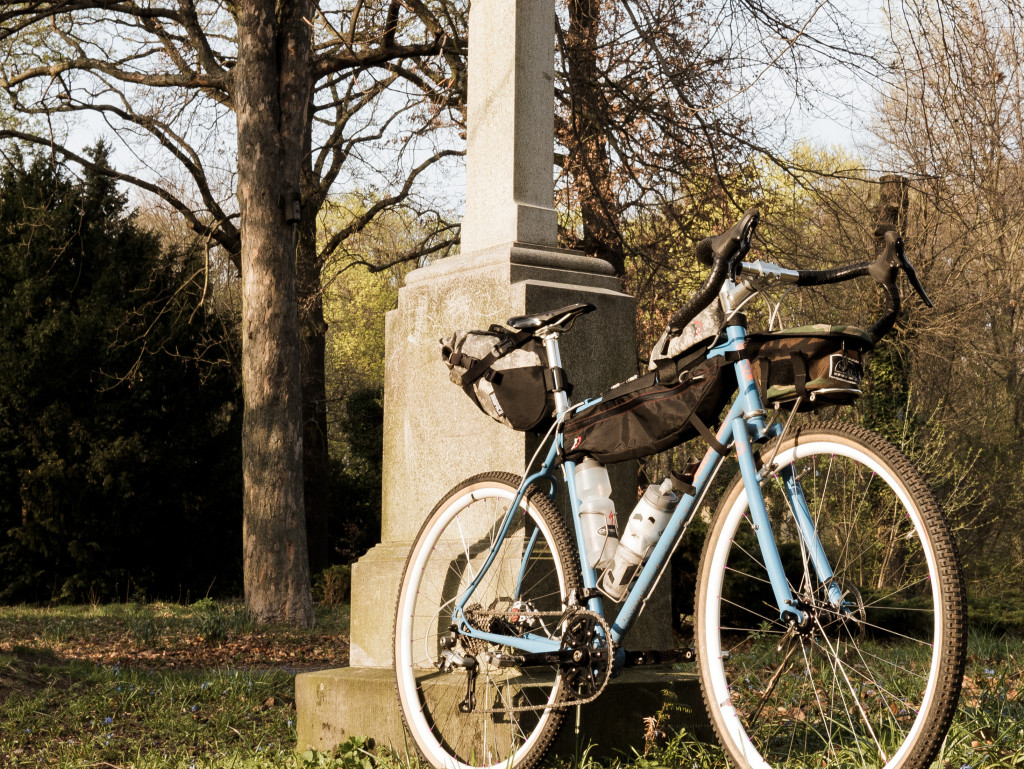 The TransBrandenburg starts tomorrow.  Three Etape, three days, two overnighters, 450km around one of the least populated states in Germany and loads of nature.  Hunter, in Zombie Apocalypse-mode and yours truly are ready…well at least Hunter is ready. 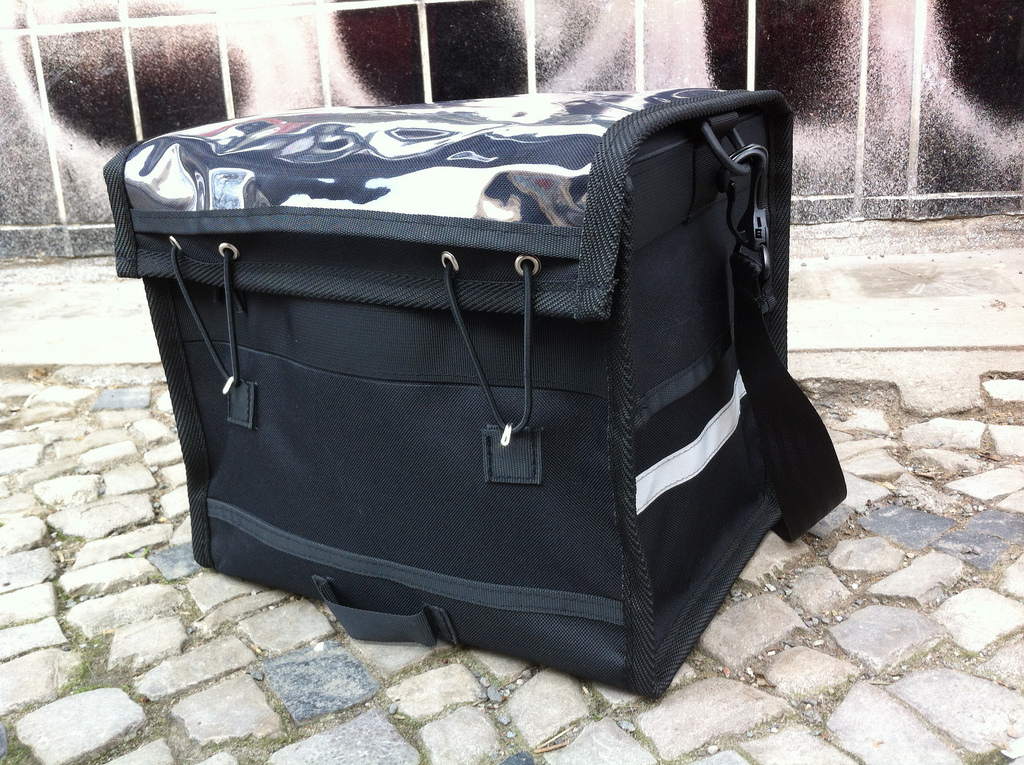 Susanne of Parsley Bags has been busy preparing new bags.  I love how clean the bag is and how much individual influence the customer can have.  Hand Made in Berlin, Germany.